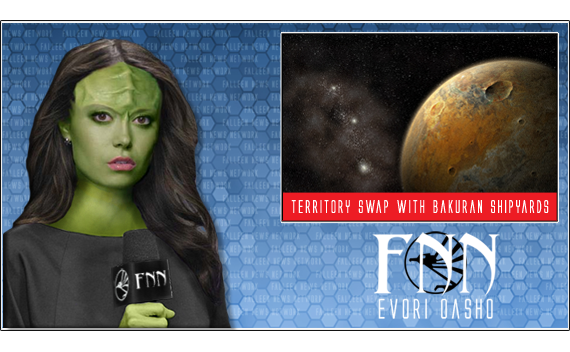 Coming to you live from FNN, Evori Oasho is breaking exciting news for the Federation.

The screen inset shows a map depicting the different areas of space involved in the deal.

“We sent a request for information to the Ministry of State asking why this trade of territory was taking place and what it will mean for Federation citizens, especially those who call the Alzoc sector home. A response from Queen Kimberly Tylger herself, the head of the Ministry of State, responded to us just a short while ago with the following statement:”

Bakuran Shipyards approached us several months ago regarding the possibility of this trade happening. We were initially hesitant, as we highly value our territory and the people in it. After long nights discussing the pros and cons of making this move we came to an agreement that moving forward with the trade would strengthen the Federation as a whole. The Alzoc sector is outside the core territory of the Federation and in the case of a military attack or emergency the response time of Federation forces would not be ideal; whereas the Barie and Likasha systems are located just east of our home sector, Doldur. We feel that consolidating our controlled territory closer to our core will allow us to respond quicker in emergency situations and provide a better quality of life for our citizens. After negotiations with Bakuran Shipyards, we will both be offering financial assistance to any citizens wishing to relocate as we understand this move can come as a shock to longtime resident of these systems. We are certain that the citizens of these systems will still enjoy a great quality of life and protection despite the change.

“So there you have it, soon we will be welcoming citizens of the Barie and Likasha systems to the Federation and waving goodbye to those who wish to remain in the Alzoc sector under the new governance of Bakuran Shipyards. For all those in the Alzoc sector who have questions or concerns or are interested in taking advantage of programs to allow for relocation to another area of Federation space please take note of the methods of contact after this broadcast. We promise to stay on top of this to ensure that the citizens of the Federation are being treated fairly and being compensated for any costs or hardships this move incurs on them. Federation cartographers will surely be busy tonight as this move shifts the Federations borders significantly; this is Evori Oasho with Falleen News Network signing off. Goodnight Federation.“