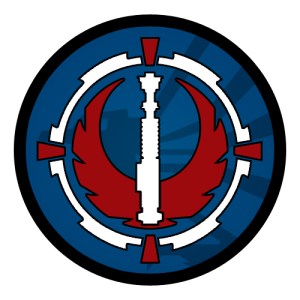 The Templari Order are an order of Force-practitioners loyal to his Majesty, the King of the Falleen Federation. They are fully trained in the ways of the Force, martial abilities, and battle tactics. For the Templari the lightsaber is another tool in their arsenal, not holding the same significance that it might for a Jedi or Sith. They train alongside the King’s protectors, the famed Crimson Guard, and are nearly as well versed in using blasters, hand to hand combat, and strategy as their counterparts. Where as the Crimson Guard focus primarily to defend the Council of Lords from threats both outside and within the Federation, the Templari Order is focused on protecting the Federation as a whole and the teachings of Kiyorath Dhin. They see the force as a tool given to them by Kiyorath Dhin to protect the Falleen people and the modern day Federation, because of this they don’t see the force in a spectrum of dark & light like many other force groups. This isn’t to say that the Templari are all the same, the opposite in fact is true, just that dedication to the preservation of the throne and her people come first and there are many different ways to achieve those goals. Rogue Templari are rare but not unheard of, though the act of going rogue is seen as turning one’s back on the throne and the god Kiyorath Dhin. This great insult often means the offender has made an enemy of the entire Federation and between the Templari, the Crimson Guard, and the Falleen Protection Forces they typically see the error of their ways in short time

The Order does maintain it’s own internal system of seniority and ranks, though it does not act as a separate department or sect of the Federation operationally. Before the first Templari ever thought to call themselves Templari, force sensitive Falleen worked to aid their clans for the good of all. They did not seek power over others but to use their abilities as a force multiplier when working in the fields, on the hunt, or assisting architects and builders. As time went on that tradition of working side by side with their non force sensitive peers became a core tenet of the Templari. Today, it is common to find Templari within all departments and sectors of the Federation helping in a myriad of different ways whether it’s aiding the skilled Doctors and Nurses treat patients and research new medicines within FMC or aiding the FPF’s scouts in the mapping and exploration of uncharted space. While the Master Templari oversee much of the day to day organizing of training or seeking out young force sensitives, the Grand Master Templari acts as the hand of the King alongside the Lord Captain of the Crimson Guard. He or she oversees the Order in a broad sense but reports directly to the King and often acts as his intermediary in situations requiring it. The Templari of the Falleen Federation are quite unique in a galaxy where many force groups seem hell bent on using their powers for subjugation or influencing backroom diplomatic deals. Should Federation space ever come under attack the Templari will be there alongside their brothers and sisters to defend their territory and people, and the aggressors shall know the fury of Kiyorath Dhin and her protectors, the Templari Order. 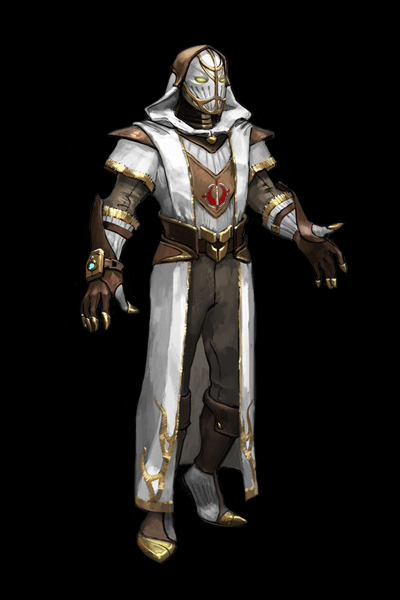 The robes of the Templari Order are utilitarian and drab by Falleen standards. Designed to allow for unhindered movement to the wearer and colored a bright white with gold trim, the robes have become a welcome and recognizable symbol for the Federation’s citizens. Though fairly simple in design the robes are woven by the Federation’s best craftspeople with a special blend of cortosis fibers and phrik reinforcement plates in key areas to provide surprisingly strong protection for it’s wearer. Once an Acolyte reaches the rank of Templari they are given a pair of these special robes to signify their ascension to a full fledged member of the Order.

The most distinctive feature of the armor is the ornate battle mask worn by the Templari in combat. The mask contains an advanced sensor suite, HUD display, and also features external speakers that can amplify sound above the roar of battle. All Templari up to the Grand Master wear the same robes in combat, this not only gives the Templari a sense of unity and brotherhood but acts as a powerful psychological advantage over their enemies. The enemy doesn’t know if the white robed warrior they are facing is the Grand Master himself or a rank and file Templari. Keeping track of the Templari on the battlefield, estimating how many there are, or attempting to identify individual members of the Order all become incredibly difficult due to the common uniform. Not to mention that when the Templari gather in force the sound of the stoic, white robed warriors chanting the Prayer of the Desert across the battlefield through their mask amplifiers is a truly awesome and terrifying sight to behold and one that has shaken the confidence of many a foe. For the citizens of the Federation the white and gold robes of the Templari Order are a welcome sight, worn by those dedicated to working alongside and for the common folk and the good of the Federation. For those that consider the Falleen Federation an enemy the white and gold guardians are to be respected, to be avoided, and to be feared.