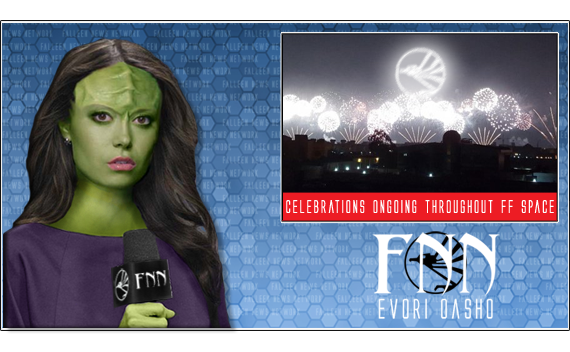 Looking especially celebratory this evening, Evori Oasho comes up on the screen.

“Greetings Federation! As you are likely aware, celebrations are ongoing across the vast territory of the Falleen Federation in honor of the third anniversary of King Jado’s coronation! From Kenosha to Geonosis there are fireworks, street parties and events. In fact, word has come in that there will be an official Pazaak Tournament open to all citizens and friends of Falleen.” The screen changed to show scenes of celebration from various Federation territories before panning back to Evori.

“The Ministry of State will also be running several raffles, with prizes ranging from credits to ships. I’ve also heard rumors that the King himself will have a casual celebration at the Drunken Rancor Inn on Falleen Prime. We here at the Falleen News Network would like to wish King Dur`rik a happy anniversary with many more to come!”